What the Hell is Chicken Skin

So I've gotten a few questions from my video yesterday asking what chicken skin is on your arms, well here ya go..
Keratosis Pilaris (KP) is a very common skin condition often referred to as "chicken skin". Most people with keratosis pilaris don't know they have it. While KP resembles goosebumps, it is characterized by the appearance of small, rough bumps on the skin. Primarily, it appears on the back and outer sides of the upper arms, but can also occur on thighs and buttocks or any body part except palms or soles. (Often confused with acne.) Source.
If you want to see pictures of what it looks like click on the source link above. I personally have the type that looks like little pimples and it's on my arms. While this doesn't hurt in anyway, it sure isn't pretty to look at. As I was researching this condition I learned that there isn't a cure, but there are several lotions that you can try that will help alleviate the 'chicken skin'. 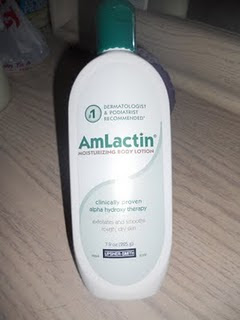 AmLactin® Moisturizing Body Lotion contains an alpha-hydroxy acid that gently exfoliates and intensely hydrates rough, dry skin.
I won't say this stuff is cheap - $15.99 at CVS, but I will say that it does work quickly. Most of my bumps were gone in 2 days and within a week they were all gone!!! This does smell slightly medicinal to me, but the smell goes away after a minute or two.
Psst...Diana just blogged about a similar lotion with a better scent and price.

If you are looking to try this product you can get a $2 off coupon here!