The Little Engine that Could

This is a personal entry and not related to makeup at ALL. I will not be offended if you decide to X out of this entry.
The Little Engine that Could is a little nickname I gave my car a few years ago. It's a little over 10 years old and boy has it taken a beating!! Just yesterday it was flooded for the second time. You read that right, the SECOND time!! I have a picture below and I know many of you are going to think..how the hell did that happen?!? Well we live next to a steam and apparently all the rain we had the night before was too much for it and it overflowed. I THOUGHT I had parked in a spot that wouldn't get any water (I've never seen this area of the parking lot flood) & I had gotten in at 3am and there was no flooding at all. The picture below was taken around 10am..
Poor thing! It takes a lickin and keeps on tickin. I began calling it The Little Engine That Could because it outlasted all of my friends NEW cars, so far it has held true to it's name.
Yes, I KNOW it's time for a new car..
I love my little car though, it's been with me since the beginning and thankfully I've never gotten into an accident with it. Plus I've NEVER had to make a car payment in my life (car was a gift) and my insurance is DIRT cheap, especially for living in NJ where car insurance prices are INSANE.
Here is my car/boat. 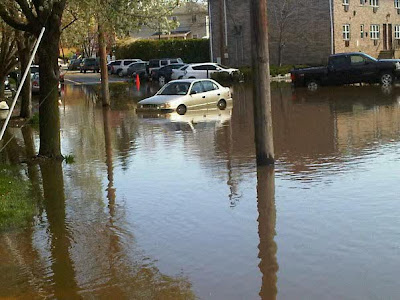 Yes, that GOLD car in the middle of ALL of that water is mine!!
I am happy to let you know that my car is WORKING!! The inside is still pretty wet since the water came up to the seats yesterday, but she's working and I'm VERY thankful for that.
Happy Monday!!!