So I swear even though I'm going to talk about the final day of the democratic convention this post is not about politics, but people and makeup of course!! lol Last night as I was watching the Democratic Convention (I like to be INFORMED, I will also be watching the Republican Convention), I couldn't help but notice the beautiful makeup on Michelle Obama. It was fierce!! Here is the best pic I was able to get-pic was taken from here, the quote below is also from that page. 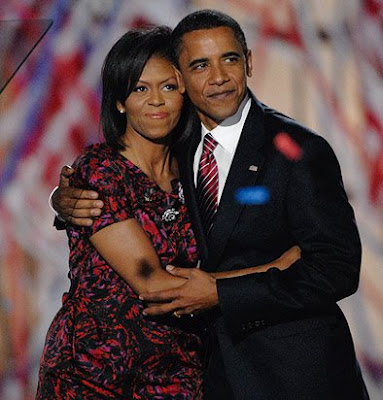 I love it!!! Yes I can find a way to make everything about makeup..lol
I was also REALLY impressed with the ad that McCain ran.
"Senator Obama, this is truly a good day for America. Too often the achievements of our opponents go unnoticed. So I wanted to stop and say, 'Congratulations,'" McCain says in the ad.
"How perfect that your nomination would come on this historic day. Tomorrow, we'll be back at it. But tonight Senator, job well done."
For those of you that don't know yesterday was the 45th anniversary of King's "I Have A Dream" speech. Isn't is amazing how far we've gotten since that speech..? It's taken a long time, but the world is really changing and growing.